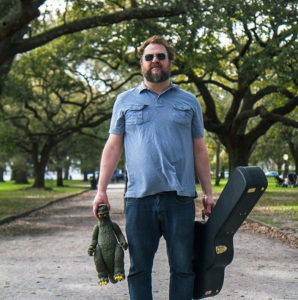 What happens when a single guy spends most of his days at home with an attentive, but unresponsive rescue pit bull as his only audience member? You get the bizarre world of Jason Groce’s Big Whatever. A one-man sketch show that is both absurd and relatable, it parodies a bunch of genres (R&B? poetry? Civil War letters? Facebook?) and shows you one person’s perspective on his world (thank God he’s the only one with this perspective.) He’ll be performing this show at The PIT’s Solocom Festival, a solo sketch festival, on November 24 in New York City.
Jason is a Greenville, SC native who has lived in Charleston for 18 years as a bartender and graphic designer. He started doing improv and sketch comedy at Theatre 99 in 2005 and is a regular performer in their programming. He won 2012’s Charleston City Paper Award as Best Local Comic. He has done standup, opening for several national acts, including Todd Barry, Colin Quinn, Tig Notaro among many others, performed at TedX, won a few comedy competitions, and has performed in a bunch of festivals, with both stand up and improv, along the way.

SATURDAY, FEB 6; 8 PM IMPROV STRIKES BACK Live improv comedy at Theatre 99 is back! We have limited our seating capacity to allow for social distancing. Shows at Theatre 99 are improv parties where[...]
Add