The longest running show in Charleston!  With 18 years and over 1,400 shows together, The Have Nots! (founders of Theatre 99) are ready for your audience suggestions.  No scripts!  All improv! Come see what all the talk is about! 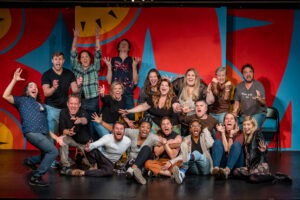 The longest running show in Charleston! The Have Nots! (founders of Theatre 99) are ready for your audience suggestions. No scripts! All improv! Come see what all the talk is about! Show runtime is approximately[...]
Add