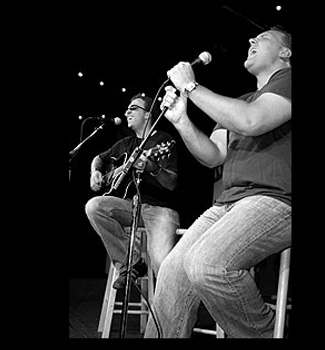 In a world where rock was king, the drugs were free, and the women were easy; two men formed from fire and brimstone a band that would transcend time and space: “DOPPELGANGER!” Now that Clive Neilsen (Lee Lewis – Moral Fixation) and Johnny Dregg (Jason Cooper – Playlist, Weird Science), have fallen on hard times they are bringing their “hits” to their most rabid fans…the patrons of Theatre 99!!!

Charleston’s only all improvised rock show, where you, the audience, shout out the “titles” of your favorite Doppelganger! songs, and have them performed for the first and last time ever.

“Lee Lewis and Jason Cooper are so good at what they do that the lines between fact and fiction may blur a bit during the show.”     – Jason Zwicker